Hi everyone. I’m the creator of the NFL / MLB / NHL / NBA / MLS / NCAAF Scores apps, and with the latest version of the apps, I’ve built in some nifty ways to “slow” the speed of the scores down.

Background: Tidbyt cycles through apps every 15 seconds. So when I originally built the apps to cycle through all the scores, it did so within that 15 second timeframe, which meant approximately 1 second per game if there were 15 games that day for a given league. That makes it very hard to consume each score.

Workaround: I built in some settings to split the scores between app “instances” so it shows fewer games in that 15 second timeframe, meaning each game stays on the screen longer.

Example: Let’s say you are using the NFL Scores app, and there are 16 games to cycles through. You can install the app 4 times on your Tidbyt and make it so games 1-4 show on the first instance, games 5-9 on the second, and so on. This makes it so it takes 1 minute to go through all the games rather than 15 seconds, so each game will stay on the screen for closer to 4 seconds, rather than jamming all 16 games into 15 seconds.

And the settings within each app would look like this: 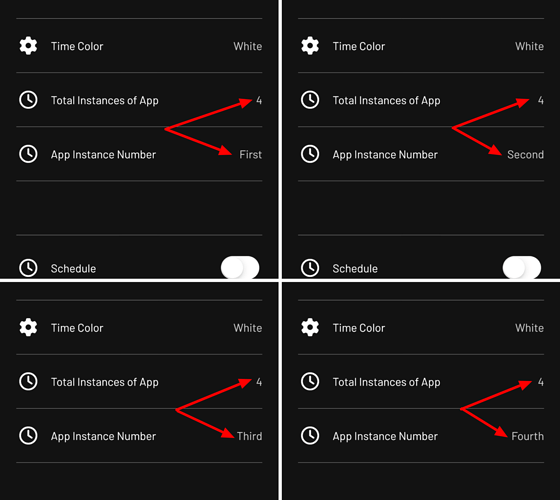 And that should be it! I built in support for up to 8 instances of the app to be installed. I’ve also added in some nifty workarounds for when there are very few games and you have it installed many times. For example, if there’s only 4 games for a given sport that day, and you have the app installed 8 times, it will skip over app instances 5-8 since all of the games for that sport will fit into the first 4 instances.

Let me know your feedback as I continue to build these apps out!

Hey… just posted this in another thread as well … new product looks awesome but I haven’t been able to locate the NCAAF application. I’ve searched on everything I can think of including your new user name. Any advice? And thanks again …

I don’t think the new apps are live quite yet, but I’d expect them to be soon.

Awesome … thanks! My favorite apps on the device hands down …

Dude you are the best! You one of the reasons why I purchased a Tidbyt, your apps make the product so worth it. This is just what I wanted to use the Tidbyt for. Keep them coming!

Thank you, awesome, all I can say is awesome

Please let us know when the college fb app is live! Season’s coming fast! On Wisconsin!

Just dropping in to say thank you. One of the biggest reasons I got Tidbyt was because I had a weird daydream that I wanted an “out of town scoreboard” in my apartment. You’ve made that possible and I appreciate it.

I know a lot about sports and nothing about coding but if there’s anything I can contribute please don’t hesitate to ask.

Hey cmarkham … looks like NCAAF product is out and it’s even better and more comprehensive than I hoped for. Odds and totals continue to be a great touch. Thanks again!

Dude! I just saw the gambling odds option all sports! I love it so much!

This is awesome thank you

Need to throw in an obligatory Go Bills! in here to appease my Upstate NY roots

Would it be possible to add WNBA scores before this season wraps up?

Thanks for your hard work!

I am noticing that some of the team records in the MLS app are displaying as (example) 12-7-_.

I’m guessing this is some sort of space issue but I wanted to bring it to @cmarkham20’s attention.

Yes, that is on purpose due to the amount of width in the record column. Unfortunately, any record over 6 characters will result in it getting truncated. The same will apply for the NHL Scores app once a record gets to something like XX-XX-XX.

Random thought, maybe total number of points could be subbed in there? Though that would probably be a ton of coding.

It doesn’t look like total points is available through the API that delivers the games/scores, but I can look into alternative means to get the data.

What you’ve done with this app is exactly what I bought the Tidbyt for. Superb.

My only request at this point …
NCAA Football. Can we get options for the FCS conferences? I’m a huge Big Sky Conference homer. I see their logos built in when they’re playing the big boys. How about some love for the little guys!

Most of them have the record available and what not too, so you could possibly just calculate the points based on the record instead of making another API call.

I also know some apis have optional data to be returned, but it just depends on the sport and API.

Do we have any update on adding European soccer leagues like the premier league?