We are pretty excited about announcing a new feature that we have been working on.

One of the things that the Tidbyt does well is to show the information you need without any cruft in a structured way, visible from anywhere in the room. Now, one thing that we want to get better at is to show it to you when you need it, and not have to wait for it to show up. We are still pretty committed to ensuring that you should keep your phone in your pocket, as much as possible at least. And lacking other means of hardware control, at least right now, we have been thinking about how we can get better in this area. 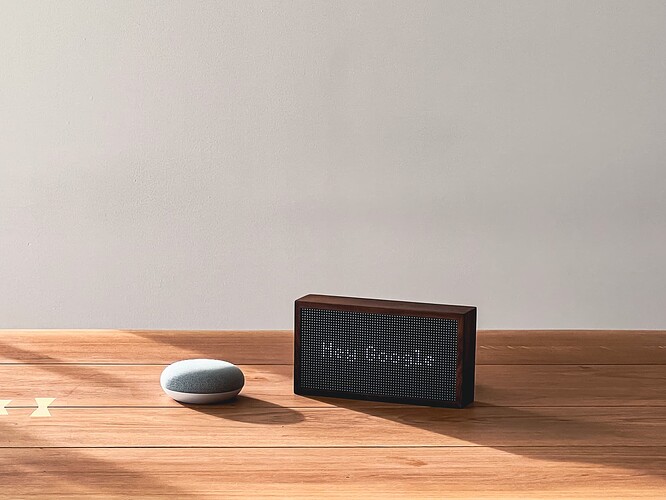 With Google home integration, you can ask your voice assistant to display the app that you want, when you need it. You can ask for transit before leaving for your commute, todays weather, when the next Mets game is, or any of the hundreds of apps that’s available on the Tidbyt!

We believe that this is something that has been missing in the smart home space. Asking my voice assistant for the next subway train is great, but the information is hard to parse if you are not paying attention to what is being said. Instead, getting that information visually on a Tidbyt is just such a more natural way to consume it.

This is also plays well with our recent release of pin / mute. Asking your voice assistant for an app that is installed on the Tidbyt that is muted or not pinned at the moment, will override that setting and show the app once before going back to being muted or unpinned.

Disclaimer : We are offering this a Beta feature right now, it’s available and free for anyone to use. Availability of this feature might change in the future as we learn more about how it performs and how it’s being used.

The reason why we started with Google home is because most of us here are Google home users. If the feature gets good response, and is being used by our users, we will look into adding Alexa support as well

Really just the same as above

What about Home Assistant?

This is something that has been a somewhat popular feature request and something that we are interested in as well. This however comes with a bit more complexity on implementing to make this work in a good way with the HA ecosystem, but we are exploring it.

We will continue to think about the smart home space and see how some of these features are used which will also help guide our investments in the area.

Was testing it out using Google voice my phone and it works great! Quick question is the desired behavior to just continue off in the order after the app that is called or should it jump back to where it was in the rotation. It currently looks like it is the former behavior.

Edit: also how should we handle multiple additions of the same app or does this go back to that nickname thing?

That’s a good call out that you can use the voice assistant on your phone, which I don’t think I made that clear in the post. The current behavior is that it will continue off the order after the app that is called. For multiple instances, the current behavior is that it will only pick one of them to show. However, based on the earlier scenario that was described, if you put all the same app instances after each other, you would get all of them to show up.

The nicknames would be more to add more casual names to the apps, e.g. instead of me saying show NYC subway, I could just say show subway. or show moon instead of phase of moon. this latter one actually already exists

we are just not currently surfacing the alternative names in any way in the app.

Is there a way a way to target a particular app if you have multiple instances of the same app installed?

e.g. I have the “Time Until” app installed multiple times.
When I say the command “Hey Google, Show Time Until on Tidbyt”, it always shows the last instance of that app.

That is not supported right now unfortunately

Very cool! I vote for Alexa integration! I would love to see that!

Thrilled to see you guys are exploring integrating with home assistant. For me there are 2 huge features that are missing right now with regards to home automation:

These key features are in my opinion the biggest pieces remaining to make tidbyt not only a great toy to have in normal users homes, but a must-have tool for smart-home enthusiasts!

I’m unable to launch TransSee (the only app that works for Chicago-area bus predictions). “hey google, show TransSee on Tidbyt” isn’t working for me.

I was able to link my Tidbyt in the Google Home app and it’s now listed with the correctly displayed screen brightness. However, every time I try ‘Hey Google’ it responds back, "Sorry, I didn’t understand that. I must be missing something.

So I had to do a factory reset when I moved the device between wifi networks - I believe that the Google integration is connected to the original profile, not the new one. I had removed the old profile from my phone app.

Is there a way to make it connect to the new profile on the current wifi network?

I hooked up our Tidbyt, and I can control the brightness from the Google Home app, but “Hey Google, show XXXX on <Tidbyt name>” gives us “Sorry, I didn’t understand that” and sometimes “Sorry, I can’t show you pictures, I don’t have a screen”. I’ve confirmed the name using pixlet devices, and I’m using the app name as it’s displayed in the Tidbyt phone app and as sent with pixlet push -i.

Some things to verify and try out if you are having issues.