Hey guys, this should be a pretty simple request for somebody technically minded, i.e. anybody but me. Where the Messages applet by Tidbyt scrolls horizontally across three lines, we should be able to have a vertical “crawling” block of text for longer blocks. I wanted to display a quote from Heroes of Might and Magic 3 that is too long to display across three scrolling lines in the native Messages applet.

You can set the marquee direction.

How do I, a moron, implement this?

I misread your post originally i though you were trying to make an app and wanted the text to scroll vertically. I don’t think it’s an option in the default app my apologies

No, you got it right the first time. I was making a request for a separate app, but I’m not sure how to create the app on my own. 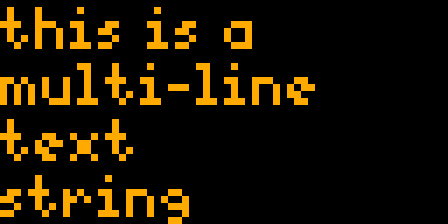 That image comes from some of their widget schema here.

If this is correct, I think this may just be a quick feature request and a toggle thing to the messages app that someone from the Tidbyt team would have to do (unless they want it in a separate app).

I’m not seeing the image you posted scrolling, but I imagine something like just a regular block of text that scrolls upwards instead of three lines scrolling independently to the side. Is there a separate place to make a features request?

No the image I posted doesn’t scroll but you can use another widget to make it scroll vertically, which is what I think you’re asking for (i.e. multi line text scrolling vertically).

And no, this would be the place to make a feature request. @rohan may be able to give better guidance if this fits in as a feature update to their existing messaging app or not. If I understand what you’re asking for, then I think it would just be a mod to their app.

If not, it probably wouldn’t take me long to whip up what I think you’re asking for.

Is it just a single long line of text you’re manually entering in?

Thanks for bearing with me. Yes, it would just be a simple long line of text, one that presumably would be formatted to the size of the display and then scrolled until completion.

I take it you don’t have anything set up yet to run and push apps? I have some color options and scroll speed set up. But you’ll have to probably host this yourself. I don’t know if they’d accept it into the community apps instead of just modifying their existing app at some point since 90% of their code is probably the same as mine, except with more options.

You’re correct, that looks great, I just don’t know how to get it on my Tidbyt

If you want to play around with some of this stuff and learn how I would look at the github and creating your own apps.

Anyways though, I submitted a PR for this though here.

Thank you. It’s been on my list of things to learn!

@Hyperion looks like they merged the PR. So should show up after they do some internal testing and stuff.

That’s fantastic. Thanks for all your help!

Looks like the vertical message app just got pushed to the app.

It works GREAT! Thanks for all your help.