I’ve expanded my alternate YouTube applet (which has more granular stats than the one available through the app) and also added a version for getting the video stats for the most recent video on a given channel (most useful for a Youtube creator). 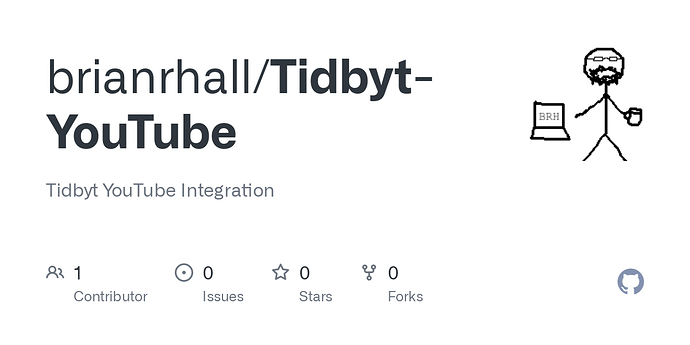 Any chance you plan to add this to the community repo? The latest video of a selected channel would be cool to have.

Hey, yeah I might do that. Haven’t gone through the process yet, so might be a good applet to go through the exercise.

Excited to use it if you do! I don’t think it should be too bad for you though since it looks like you already have it coded up!

Hi, I’ve recently tried to implement your applet. I received my tidbyt today and was excited to tinker around! Your applet was particularly interesting and so I spent most of the day today trying to get it running! (I’m a hobbyist coder at best!)

You wouldn’t have happened to run into an error in the terminal when running ‘pixlet push’, that says:

, have you? ‘pixlet render’ creates a .webp that looks great and only changes I’ve made to the code are the YouTube API keys.

Anyways, don’t feel obliged to respond by any means, just tinkering around and can’t quite figure out what causing it to fail, seemingly at the final step and can’t quite find the documentation for starlark or pixlet that seem to cover this.

Hello. Which applet are you using specifically, the generic one or the latest video one? I haven’t seen that specific error, so it makes me wonder if when you replaced the keys if you deleted a quote mark or some other small syntax thing.

Thank you for replying! I combed over everything again today and realized I’m supposed to push the .webp file after rendering the .star file! Looks great now! Totally me just overlooking the the instructions for the pixlet push!