I’ve noticed my TidByt Clock app is delayed from my other devices by about 50 seconds using the iOS stopwatch. While this doesn’t matter most of the time, it means i’ll be at least a minute late to a meeting over VC

See the attached image for the time difference across my devices: 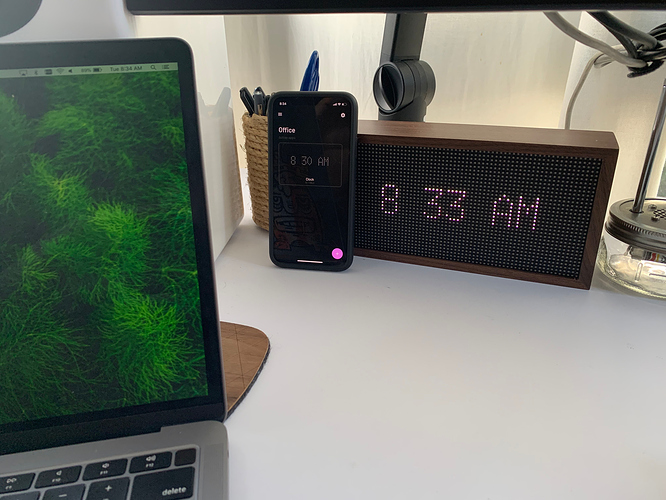 Hey Mark! Thanks for the feedback. I’m able to reproduce this problem on my end and am looking into it now. I’ll let you know when we have a fix.

This should be mostly resolved now— the time should never be off by more than 15 seconds.

We plan to get this down to 0 seconds in the future, but unfortunately that’s going to require a larger redesign of the Tidbyt backend and firmware.

Thanks for updates Rohan.

Maybe anything clock related can be coded in a way that relies on device time? As currently the architecture appears to be a displayed image created at the run-time.

Imagine the (or any, like fun clock designs etc) clock face of tidbyt was implemented in a different fashion. So that it was a real-time rendered portion of the display, then the rest can continue operating as a image sent to device. Maybe the clock image is sent and the firmware interprets it should insert its own time value.

It would be difficult to implement these ideas of course, just good for thought you guys.

keep up the good work

Edit: or add backend logic that will push a new clock image if it is aware that it is displaying a clock face on the tidbyt when the minute changes. Also maybe have way of displaying for less seconds if it changes after clock was displayed already for 10 seconds

Edit: or add backend logic that will push a new clock image if it is aware that it is displaying a clock face on the tidbyt when the minute changes. Also maybe have way of displaying for less seconds if it changes after clock was displayed already for 10 seconds

That’s actually the next step! Basically, adding a “TTL” so that if the clock expires while being displayed, it gets refreshed right away. The nice thing about this is that it would also generalize to other things like train times or calendar events.

Any updates on time to live?

Just to clarify, this is the thing to set a different display interval on a per-app basis? I think for that, the part that’s harder than just implementing TTL is figuring out what the UI looks like to do a different update interval for each app. Let me run it by the team tomorrow morning and see if we can come up with something.

In a sense, yes this would be an option that allows an app to display longer on tidbyt.

From a UI standpoint, I think it can be simply
“Display app for extended interval” toggle, so you may have the News app display longer than the rest of apps in the cycle.

Alternatively - if the app is displayed, the tidbyt will allow the webp to play one entire cycle without loop , this would enable whole tweet display, news, and if you send a longer animated image/app

Really I think you could implement this for just the apps with information that can change in length, so you want to display the whole thing at least once

Thanks for considering this, would also be cool to allow for images sent to API have this option too.

I know you guys are busy so I can understand this isn’t a high priority feature. Just some feedback