I love my Tidbyt and currently find it most useful on my desk. I live in a one bedroom in Brooklyn with plenty of natural light. My bedroom currently doubles as my office. I can never seem to get the Tidbyt in a brightness level I am happy with. Here are my current issues and solutions:

Hey Mark! Thanks a ton, this is really useful feedback. I love the idea of “quiet hours” as well.

Anyway, I discussed with @matslina, and here’s what we’re going to try to do right away:

Those are the two things we’re going to try to do right away.

I also hear you on the ambient light sensor. That’s something we could experiment with and try to integrate into future devices. The main issue I’m stuck on though is where to put the sensor.

If it’s just mounted on the PCB at the back of the Tidbyt, we’d be measuring brightness behind the device, which may or may not be useful? Ideally the sensor would face forward, but it’s not clear to me how to do that without having a literal hole on the front of the device.

All that said, we’re releasing a basic public API today or tomorrow that can be used to control the brightness of a Tidbyt. So in theory you could hook up your Tidbyt’s brightness to anything from a light sensor on your window to the phases of the moon

Following up here. We’ve now implemented a “Night Mode” feature that dims the screen and shows a clock. If you update to the latest version of the Tidbyt app on your phone, you should see an option to enable it.

Also, here’s an example of how you could use it to create a “wake-up light” or “sunrise simulator”: 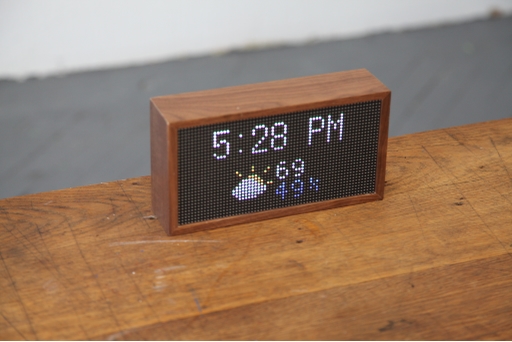 Use Tidbyt's night mode for a gentle wake-up.

Not sure if this is possible but have you considered integrating the light sensors into the display itself?

Is it possible for app/widget developers to control the brightness of the entire display (or individual pixels)?

The brightness of the entire screen is set by the user and can’t be controlled by individual apps. However, apps can display darker colors (closer to black) and that has a similar effect. There is no way for an app to exceed the set brightness though.