I’m looking to verify SDK capabilities for this product as I am a software engineer by profession. I intend on building integrations between Azure / GitHub / Outlook / Teams / Spotify etc… to push events to Tidbyt so I can get clear visible notifications.

Perhaps I am failing at searching for a definitive answer, but I can’t seem to get a solid answer to as if this is going to be capable with Tidbyt?

Where is the documentation for interfacing with the device?

Simply need to know if this is going to be the physical device I’m looking for or if I need to cancel my order and look for another option.

Basically, you can create an application that calls an API or read data from a file, then render it and push the resulting image to the tidbyt in real time.

This would be how you can have an alert display on the device.
However, it requires you to have a Linux or windows instance running with the tidbyt “Pixlet” software and custom code to handle your creation of alerts and converting that to a readable output on the Tidbyt.

Another future API option that should be under development is sending a message to tidbyt. This way you could simply send a string of text to tidbyt when an alert is created in your alert monitoring solution.

In the future I believe user apps will be supported, in this case, you could have a custom app that calls an API, and renders the result when it gets served in the tidbyt app rotation.

Let me know if you have other questions, as I’ve done a similar thing to the first option for my own apps.

Hi @James , thanks for responding so quickly. I assume by Pixlet software this would be an included library with in my custom service?

Does it require me to go through the Tidybit servers or can I call my device directly?

Sounds like to make an animation we will require to build and send multiple images to be presented in succession.

Could you point me to where the documentation is on refresh rate limits, and the APIs so that I can understand how to build my broker services with Tidbyt?

No problem. Here is the API documentation

Develop on the Tidbyt platform.

Then it will display on the physical device.

I don’t think any direct-device connection is possible. Rohan touched on this on a different topic but the way it’s currently designed, the API to push images is about the most direct way to use the device.

Let me know if you have other questions

Animations can be done in the pixlet software. You can view the documentation here.
Look under Modules Reference for detailed implementation of animations / shapes etc 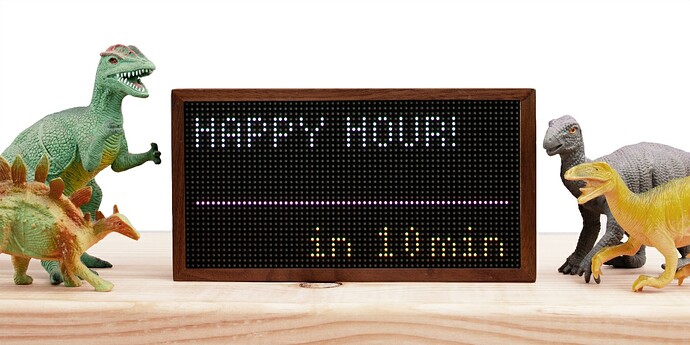 Build apps for pixel-based displays. Contribute to tidbyt/pixlet development by creating an account on GitHub.