What time is it? It’s game time with the newest applet addition: American Football. The Football applet shows live scores on game day and division standings throughout the week. Have a favorite NFL team you’ll be tracking through your Tidbyt? Let us know in the comments below 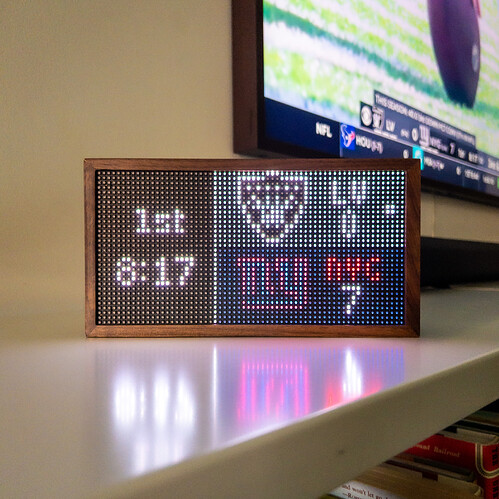 Will it rotate through all the score?

I’ve added a toggle for game day only to only display the applet when a game is scheduled that day:

For college sports, it’s certainly on the roadmap but I’m not sure how fast we can make it happen. Check out this comment for a bit more background: Mlb/ sports - #15 by mark

For ticker style scores - that’s a great idea! Some folks are asking for a similar model for stocks. It breaks a lot of the assumptions we’ve made so far though, so the change would take a bit more work to support properly. We’ve really focused on having an “installation” that tracks something you care about and have the ability to cycle through installations to view additional things you care about. To support tickers, we’d need to a way to ensure:

May I suggest one slight change to this apps operation?

When it’s doing the “ticker” of current league standings, #1 scrolls off screen almost immediately when the app starts. Could there either be a slight delay added before it starts scrolling OR start scrolling from the far right instead of fully left justified.

Either would allow an extra second or two to see the #1 team.